Home
Business
COVID-19: Will it Change Our Beliefs and Way of Thinking?
Posted on April 21, 2020April 21, 2020by Team AgnelorajeshPosted in Business, Uncategorized
00

We have spoken a lot about how the current crisis will change business in many ways. What we also need to realize is that it will change us personally in a big way too.

The way we behave and the way we think will be poles apart to what we used to do earlier. We need to be prepared for such changes and adapt quickly to the new way of working in society.

A new look at patriotism

Earlier, we had heard of cases where people stood up in public places and clapped when people from our armed forces passed by, whether they were at airports or railway stations. Now the definition of patriotism will be broader.

We will acknowledge the tremendous efforts of the health-care workers such as doctors, physicians, nurses, who have worked tirelessly during the lockdowns. We will continue to do so in the future too.

The Municipal authorities who have kept the city functioning despite the fear of the spreading virus, the sweepers, the maintenance workers, etc. All these will be our heroes too.

Charities and NGOs will bloom

Especially touching are the charities and NGOs who have contributed in a big way to helping the poor and the needy. Even millionaires and billionaires have made it a point to give away a part of their wealth to fight the virus.

One example is Twitter’s CEO Jack Dorsey giving away 28% of his wealth to help various efforts on this front, and this will encourage many more to do the same in the coming months.

A new look at politics and people in authority

In times of crisis, it is essential to have the right people in control. If the government has the right people at the helm, then what they do during such a crisis is dictated by their intelligence.

A case in point is what is happening in America today, where the government is being blamed for its inefficiency in controlling the spread and devastation caused by the virus. A veteran well-trained politician might have handled the situation in a very different manner.

The way China has handled the situation might be a better example than the way America has dealt with it. It is debatable whether this gives more points to authoritarian rule or democratic rule.

A lot of religious activities have come to a grinding halt – at least the way they used to happen earlier. The way we keep or celebrate festivals will change forever. In India, especially, festivals are mass celebrations, and these will have to be curtailed in a big way.

Holi, Diwali, Navratri, Ganesh Utsav, Eid, Easter, Christmas, etc., will be celebrated in a much-subdued atmosphere. Faith will be sorely tested, but it is heartening to see that many of the religious functions are shifting to online as well.

Need for society to come together

Strangely, in an atmosphere where we need to keep a social distance, the need to be a part of society to combat the virus is also present. A lot of people who used to earlier live separated and independent lives will need to be connected to the community.

Taking care of the elderly and disabled people will become a priority in this crisis. Even coming together to order our daily essentials for the entire society is one way of forming a better community.

It will be better to do things together, despite maintaining a social distance, to get economies of scale and to get essential services ensured.

Earlier we would question whether we need to take a meeting online instead of doing it face-to-face, but now we will want all meetings online. We will always remind ourselves not to shake hands, to avoid crowded events or even malls, and fear also to attend any mass function. 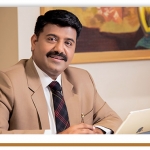 BANKING ON LUCK CANNOT GIVE YOU SUCCESS. INNOVATION HELPS.

Posted on September 14, 2019by Team Agnelorajesh
Some entrepreneurs get lucky in business and succeed. By DESTINY…