Disaster and calamities can be great levelers – no pun intended. If we look back at human history and the way we have progressed over the centuries, it is a known fact that such dire situations unleash whole new creativity and an even more significant spurt in progress in the next few years or decades.

The Black death, revolutions across different countries, the world wars, the cold war, have all resulted in agricultural, technological, and industrial revolutions which have brought humankind to its current stage of progress. If these had not happened, we might have been far behind in terms of what we can do today. This is not to say that such catastrophes are needed – it is just that most of them were unavoidable. And we did not progress because of these situations, but despite these situations.

It is the same as the current pandemic. And humanity will progress despite COVID-19.

Let’s take a look at what has happened in the past and what we can expect in the future.

Thank you for reading this post, should you have any suggestions or feedback, please feel free to share your thoughts in the comments below. 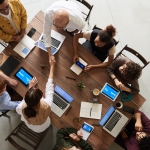 Networking may be a widely spoken and practiced concept, but…