There’s sunshine at the end of these dark times. Let me assure you that India will come out shining after this crisis

With the lockdown being extended, India is taking drastic steps to ensure we don’t end up like most developed nations today.

While the United States, Spain, Italy and a number of other countries are struggling to contain the COVID-19 pandemic, India is thinking out of the box and even converting railway coaches into intensive care units (ICUs).

There are several factors that will see us through this crisis :

We all know that Indians have some of the highest immunity levels across the world. At times like these, this will be our biggest advantage. So keep yourself fit and healthy, and try your best to increase your immunity levels.

The cold weather is the biggest problem in developing countries where the infection and death rate is high.

However, in India, we see temperatures soaring much above 40 degrees Celcius during the summer. This could be another point in our favour since heat is known to kill viruses faster.

The largest exporter of medicines

Recently, you must have read about even the United States requesting India not to hold back the export of medicines like hydroxychloroquine of which India is the largest producer in the world.

Pharmaceutical exports from India stood at US$ 19.13 billion in 2018-19 and are expected to grow by 30 percent to reach US$ 20 billion by this year. With this crisis, we could go even higher.

People have already realized the importance of Ayurveda and Yoga. Did you know that the best remedy for fibrosis is exercising the lungs using specific Asanas and Pranayams?

This is the ideal solution for diseases like COVID-19 which attacks the lungs. Ayurveda and Yoga could be our next big exports to the rest of the world.

Manufacturing Hub of the World

India is now moving fast to become one of the most important hotspots for manufacturing medicines and a host of other products as well.

We could be the next superpower exporter post the crisis since China will not be the favored location after this. India will surely rise up to this challenge and begin inviting the biggest corporations to set up offices and manufacturing facilities here. Make in India is what the world will say now.

Becoming the biggest manufacturer and exporter means increased jobs for the local population. This will drastically bring down unemployment across the country.

Higher employment will mean more money in the hands of the people and more money being spent.

India’s quick action on containing the pandemic is already being appreciated the world over. People might feel safer to travel to India, and this could mean more tourism whenever the scenario becomes favorable.

India will beat recession faster than the rest of the world

Any economist will tell you that when people start spending more, the economy will grow quickly. With the employment rate going up and increased spending, we could beat the global recession faster than the rest of the world.

Thank you for reading & watching this video. Until next stay positive, stay safe. 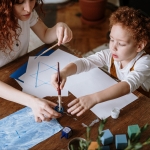 COVID-19: 5 Tips for Parents on Homeschooling

No thanks to the pandemic, most of us are handling…