Friends here is some good news in the midst of all that is happening today. And you will be proud to hear this. Did you know that the world is sitting up and talking about how India is handling this crisis?

While superpowers and the most developed countries are fighting to handle the situation, India has shown the world how to take quick and mature decisions without hesitation.

Let me discuss some measures taken by India which are being applauded worldwide:

We have implemented Quick and decisive action

While some developed nations were dilly-dallying and taking the crisis lightly, India moved swiftly and surely to impose a lock-down which is expected to slow down the spread of the virus.

Even till a few days ago, some countries were wondering whether to close down their beaches and some world leaders were not sure whether they should wear a mask or not!

Our PM went live on television and alerted the nation about the crisis, and explained how to tackle it immediately. Many of our chief ministers also took these proactive steps simultaneously.

Our Planned shutdown was very helpful to contain the Virus.

While a lock-down can cause mayhem in most cases, the shutdown in India seems to be done with care. There are fewer people on the roads, and all essentials are available so that there is no panic situation. While there was some initial panic, people soon realized that the government was allowing outlets selling essentials to remain open.

Even in a country like the US, stores have no stocks remaining, unlike in India. Kudos to the authorities for ensuring that the public does not suffer unnecessarily. And kudos to all the government teams which are working for us tirelessly and in spite of working in risky conditions.

Great response by the public

Few people are used to forming long lines for purchasing essentials in India. But today if you see, they are patiently awaiting their turn.

In a supermarket like D-mart, people patiently collect coupons and come at the allotted time to buy what they need. The calmness of the Indian public is surprising foreigners because even in the US people are buying guns and ammunition because they expect the worst, while we are going about our business without such panic situations.

There is a Great and fantastic response by corporates

Most corporates have responded beautifully, by allowing their employees to work from home even before they were ordered to do so.

They are even taking advantage of technology like video calls to hold daily meetings to fill in the communication gap. Again, many supermarkets are open till 3 am to ensure that there is no shortage of essentials.

All the chief ministers have taken swift action. Irrespective of which party they belong to. There is no undue opposition by individual states. Even the police are being strict and not allowing people to roam around for no reason.

While some might say the action taken by them is harsh, we must remember that the situation is such. It is countries like Italy and Spain who have appreciated these measures because they know what they are going through today.

There has been a very impactful Social Distancing

Even while some countries are wondering how to maintain social distancing, people are talking about how we are drawing circles outside shops selling essentials, or even ATMs and banks to ensure that people stand only in these circles and maintain a distance from each other.

Social media is full of images of how calmly we are handling the situation.

India has Created hospitals from scratch

While many developed countries are saying they have a shortage of hospitals, India has given the go-ahead to convert railway coaches into ICU wards.

With our railway network being so vast, we have overnight created 10-thousand-bed mobile hospitals which can be sent to any part of India should the need arise. This is such a quick and practical solution that the world is sitting up and taking notice.

Thanks for reading & watching the video. Until next stay positive, stay safe! 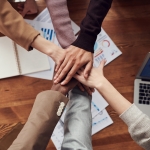 COVID-19: Collaboration is the New Buzzword for Survival

We will know the actual value of the saying ‘Saathi…